Synology Surveillance Device License Packs are designed for expanding cameras, I/O modules, intercoms, access controllers, IP speakers, and transaction devices set up on Synology Surveillance Station. By default, you would have default licenses that come with Synology NAS/NVR; extra licenses can be purchased for additional surveillance devices as your business grows. 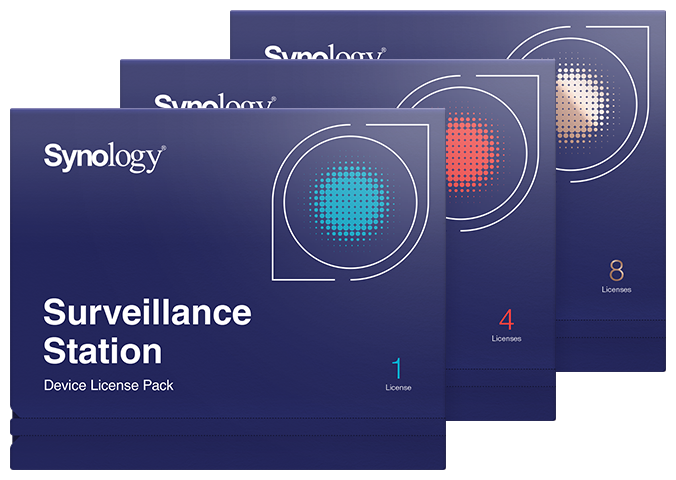 To find out the maximum number of surveillance devices supported on each Synology NAS/NVR, please refer to the specifications of each model.

Under most circumstances, each IP camera, I/O module, IP speaker, intercom, and access controller will only require one license, while each transaction device will require two licenses. However, multi-lens cameras and video servers for analog cameras may require additional licenses. For more details about supported cameras and surveillance devices, please refer to the Camera Support List and Surveillance Device Support List.

In the table above, you can see a detailed example of four different camera types. Certain panoramic cameras (e.g., Axis M3007) supporting on-camera dewarping may provide more than one stream (e.g., Quad View, Double Panorama, and Original View) at a time. Each regular and panoramic camera requires one license only.

There are two types of multi-lens cameras: fixed lens and removable lens. Most fixed lens cameras providing more than one stream at a time require only one license per camera. For fixed lens cameras with independent IP addresses or removable lens cameras, you will need one license per channel. For example, you can add as many as three lenses to Axis Q3709-PVE, which allows you to stream up to three channels. If you want to display all three channels in Surveillance Station, you will need three licenses. Take Axis F44 as another example. Axis F44 (with as many as four lenses) allows you to stream up to five channels, with four of the channels displaying footage from the four lenses, and the fifth channel combining the view of all four cameras. If you wish to display all five channels in Surveillance Station, you will need five licenses accordingly.

Video servers such as Vivotek VS8801 can connect to as many as eight analog cameras. In this case, you will need eight licenses accordingly. This rule also applies to video servers that are compatible with Surveillance Station.